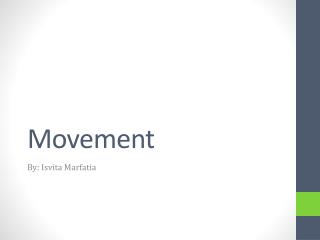 Movement. By: Isvita Marfatia. Introduction: What is movement?. Movement is the power to control each individual muscle throughout your body. Khilafat Movement - . what is khilafat. concept : in political lexicon khilafat is the name of muslim rule in an islamic

Chapter 1 - . safety and health movement then and now. major topics. developments before the industrial revolution.

The Progressive Era - . the gilded age part 5. as the 1900 ’ s opened, reformers pushed for a number of changes.

The Progressive Movement - . a major purpose of the progressive movement (1900–1917) was to (1) stimulate the economy