Prevention of Torture and Rehabilitation of Victims - PowerPoint PPT Presentation 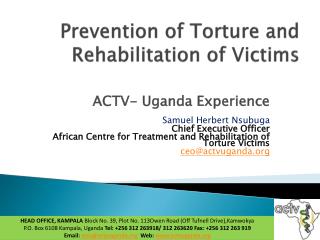 Prevention of Torture and Rehabilitation of Victims Prevention of Torture and Rehabilitation of Victims

Prevention of torture in South Africa - . amanda dissel centre for the study of violence and reconciliation. background.

Management of Rape Victims - . martin donohoe information within does not constitute clinical advice regarding treatment

Australian Victims of Abuse - . history of abuse. the native australians, aborigine's or the original inhabitants,

Torture and execution - . by beatrix. 1. the rack torture. the rack is commonly considered the most painful form of

Torture and execution - . by paris perry 4 points. exposure. exposure is a method were the victim would be stripped of

THE ABSOLUTE PROHIBITION OF TORTURE - . rights and realities. 1.the aftermath of world war ii / the setting. - united