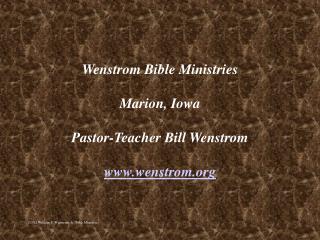 Hannah From the Bible - . by: peyton dolan. hannah. hannah is found in the old testament in the book of samuel. her Fresh out of Bible college: Life as a graduate pastor - . a bit of background. rachel and i came to france in 2002 both

I Am Your Servant (Wenstrom) - . you are my righteousness, i rest in your faithfulness for the promises that you made to

Science and the Bible and Noah’s Ark By Pastor Phil Layton - *credits: picture slides, unless otherwise noted, are