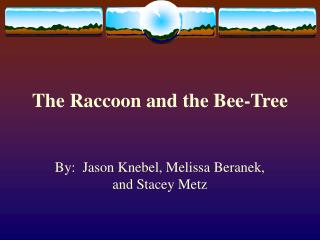 The Raccoon and the Bee-Tree. By: Jason Knebel, Melissa Beranek, and Stacey Metz. The Raccoon had been asleep all day in the snug hollow of a tree. The dusk was coming on when he awoke, he jumped down from the tall, dead stump in which he made his home, set out to look for his supper. Contrasting the Opossum and the Raccoon - . by: zach conner and jennifer. opossum and raccoon. number of babies opossum

Raccoon - . allison, kyle, grace, tyler and michelle. the raccoon is a mammal. it is mostly gray and has a black mask and

The ‘Bee’ Poems - . a focused overview of the five-poem sequence plath wrote about bees in less than a week in early

Raccoon Trap - Http://raccoontrap.net raccoon trap, how to trap a raccoon, getting rid of raccoons, trapping

Raccoon - . riley. what it looks like. . a raccoon has white above it’s eyes and on both sides of it’s nose. a

The Modern Bee Hive - . the langstroth hive. a history of bees and man. the “honey seeker” – cave painting near