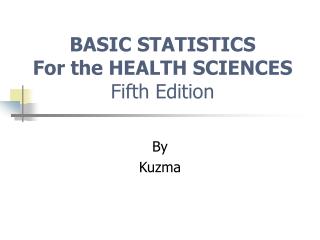 BASIC STATISTICS For the HEALTH SCIENCES Fifth Edition. By Kuzma. CHAPTER 1. Statistics and How They Are Used. OUTLINE. 1.1 The Meaning of Statistics Formally defines the term statistics and illustrates by describing what a statistic does 1.2 The uses of statistics

Biostatistics - . many issues in the health, medical and biological sciences are addressed by collecting and exploring