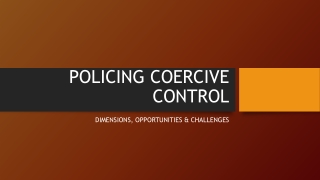 Introduction - . decay of cities in 1970s and 80s: neglect of american cities 1990s resurgence of government and public

‘Changing policing and policing change’: placing Scotland in a comparative context - . nick fyfe. why? forces for

Policing within the EU: Social Control at what cost? - . prof. john winterdyk jwinterdyk@mtroyal.ca director: centre for

Moral Issues In Policing - . moral issues in policing. should police be held to the same or higher standards than other

POLICING TERRORISM: A THREAT TO COMMUNITY POLICING OR JUST A SHIFT IN PRIORITIES? - . presented to the international