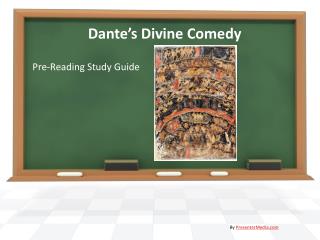 Dante’s Divine Comedy. Pre-Reading Study Guide. By PresenterMedia.com. Who was Dante Alighieri?. Dante, of course, is the author of The Divine Comedy . He was born a Roman Catholic in Florence in 1265 C.E. He died of malaria in Ravenna, Italy, in 1321 (the night of Sept. 13-14). By: Michael Jaramillo - Introduction. written by dante alighieri in 1314.dante's inferno is the first part of the divine

The Comedy of Errors - . the comedy of errors. shakespeare’s earliest comedy , although the exact date of writing is

Humor and comedy - . humor. humor can be seen as anything that makes us laugh or is amusing, or the ability to recognize

Dante Alighieri - . his life and his work: the divine comedy. inferno. dante alighieri’s life:. born in florence in

Types of Comedy - . comedy of ideas comedy of manners farce low comedy. candide uses them all!. comedy of

DANTE’S VISION OF HELL, THE INFERNO - Dante’s inferno (italian for “hell”), the first part of the 14 th century

Warm-up #13 - . why was don quixote a flawed hero? what does miguel cervantes’ story imply about chivalry and the

Dante Alighieri (1265-1321) - . dante born in florence—more like an independent greek city-state than a city florence

Comedy - . what is comedy? where did it come from?. comes from the greek word, â€œrevelâ€ +