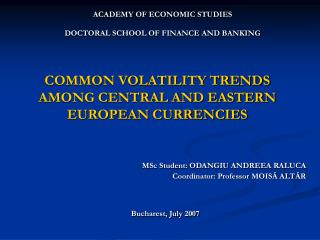 A comparison of the exchange rate volatility between Central-Eastern European Currencies and Euro - . student: nechita

Central and Eastern European Absolutism - . juxtaposition of eastern and western europe. prussia and austria. both turn

European Currencies - . what is the european union?. it is a group of 27 countries who have come together to have

EUROPEAN UNION AND CENTRAL AND EASTERN EUROPE - . for most of 20 th century eastern and western europe have been isolated

Central and Eastern European Cogeneration Equipment Markets - . “this market sector has huge potential for oem’s and

Central and eastern Europe - . prerequisite to communist rule in cee region: turn to authoritarian institutions prior to