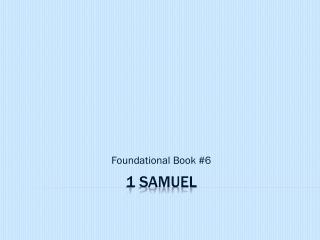 Foundational Book #6. 1 Samuel. The Book of 1 Samuel begins with the birth of Samuel which was perhaps around 1100 BC, and the book ends with the death of King Saul in the year 1011 BC Time Covered 90 years of Israel’s history KEY WORD King KEY CHAPTER Chapter 8 KEY CHARACTERS Samuel

1 Samuel 1:21-28 - . summary review:. hannah was wrapped in shame and guilt because of her barren condition and inability

1 Samuel 16.1 - . the lord said to samuel, “how long will you grieve over saul, since i have rejected him from being

The Battle Against Giants Belongs to the Lord 1 Samuel 17 - . david was a great king because he was “a man after

Eli, Judge of Israel 1 Samuel 2-3 - . background. eli judged israel for 40 years was the high priest of israel no record