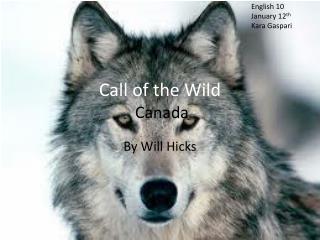 Call of the Wild Canada English 10 January 12 th Kara Gaspari. Call of the Wild Canada. By Will Hicks. Churchill. Churchill is the top spot in the world for polar bear and beluga whale sightings, and it is also one of the best places to see the Aurora Borealis, the Northern Lights.

Call of the Wild Canada

Into the Wild By: Jon Krakauer - . tiffany, antonio, michona, yasmin. author’s life…. after writing into the wild,

The Call of the Wild - . chapter 2 – vocabulary sort. the law of club &amp; fang. on a sheet of paper, arrange the

Wild versus zoo - . giraffes in the wild. eating habits: eat off high leguminous plants on their own, when they are

You’ve been hacked, now what? By Wild Wild West - . agenda. overview what we did do alternative solutions best