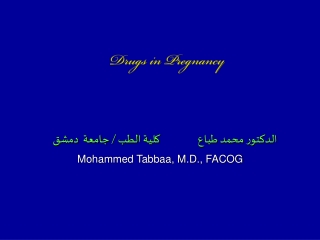 Use of Drugs In Pregnancy - . dr. mahadev desai consultant physician ahmedabad. we are in era of e. b. m. absence of

DRUGS IN PREGNANCY AND LACTATION - . aims. to update pharmacists on current opinion relating to the prescribing of drugs

Drugs in pregnancy and Lactation - . by radwan a. m.b. b.ch., m.sc. how to manage a disease during pregnancy?

USE OF DRUGS IN PREGNANCY - Learning objectives. at the end of this lecture the students should know:the dangers of use