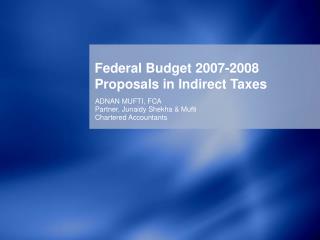 FEDERAL BUDGET 2007-2008 by - 2. table of contents. economic concepts and their translations economic inequality and

Indirect Taxes - Introduction. developments in theory since the meade report have considerably altered our understanding

IPA Budget Proposals 2008 - . prepared by david tuckett for the european presidents and representatives with grateful

Federal Taxes - . taxable income and how much you owe – your tax

The Budgeting Process - . chapter 9. visualizing the