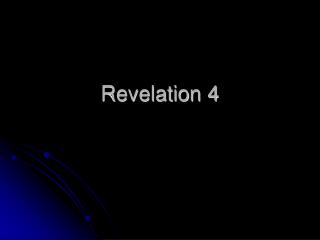 The Wrath Of GOD Revelation 15 - . romans 1:18 for the wrath of god is revealed from heaven against all ungodliness and

The Beatitudes of Revelation - . introduction. seven beatitudes, i.e., declarations of blessedness, are found in the book

Revelation of Jesus– Things are Not as They Seem – Look! A Throne! - . scripture reading revelation 4 this series

REVELATION 4:11 - Thou art worthy, o lord, to receive glory and honour and power: for thou hast created all things , and

Where the Soul Never Dies Revelation 21:4 - . introductory thoughts. a song which describes the blessings of heaven. the

The Throne of God - . revelation 4. review. revelation is a book of visions some visions are about the time of writing

Study of the Book of Revelation - . part 12 – the challenges of the church: the need for encouragement and exhortation.

Why Revelation 4:1 Is Not The Blessed Hope - Rev 4:1, john was moved in the spirit on the lord’s day, just like ezekiel

The Doctrine of Revelation 4 - . iinspiration: definition. “inspiration is, therefore, usually defined as a

Special thanks to Dr. Vern Peterman for access to his insights and resources. - Law and grace: an overview jim mcgowan,

AET-043 and 044 - . revelation 6: the red horse and gog and magog timing theories. revelation chapter 6. we are currently