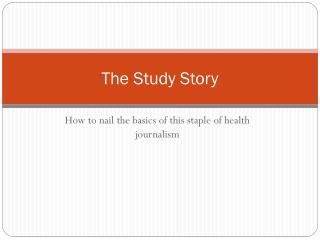 The Study S tory. How to nail the basics of this staple of health journalism. First, choose a study to cover. Must be timely (released within the month) Look beyond the top journals—JAMA, New England Journal of Medicine, Nature, Science The Snow S tory - . by katie grimm. one winter morning katie woke up and looked out the window. snow had fallen during

tory lant - . click here to create your own story. first put your headphones on so you can hear the

How to Comment on a Bill from Home Built by Tory Anderson –Tory@AZAdvocacy - .org. step #1 : open your internet browser

A Map of Narrative Practice: Its Roots - Who is telling the story?. the study of people psychology, sociology,