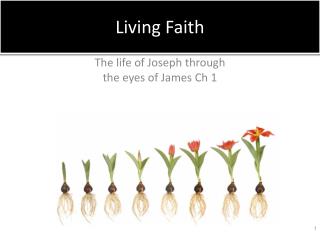 Living Faith. The life of Joseph through the eyes of James Ch 1. The Book of James. Wisdom literature of the New Testament Written to help those dispersed to deal with suffering and to see God in their lives Possible the greatest understanding in any one book of our relationship with God.

Growing in Faith Intentional Christian Living - . session 1. www. .com. what do you read most often?. why do you read

Living Faith in a Dying World - . hebrews 11 genesis 6. noah believed what he could not comprehend “… warned by god

Mary, model of faith - . who is mary for you? how important is she to you ? would you pray to her? when ?. to define

Our Confession of Faith - . 9 that if you confess with your mouth the lord jesus and believe in your heart that god has

The JUST Shall Live By FAITH - . 2013 national training nt 1301. “ for therein is the righteousness of god is revealed

FAITH MADE PERFECT - . the development of abraham’s faith genesis 12-25. faith must grow. faith can be made perfect by

Faith &amp; Repentance - . in hebrews 11:1-3 “now faith is being sure of what we hope for and certain of what we

How to Defend Your Faith - . presented by david asscherick. does the faith need to be defended?. we can easily answer