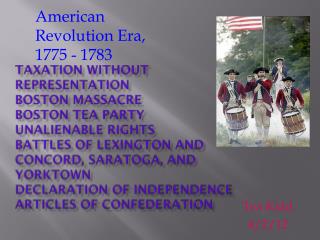 Lexington and Concord, 1775 - . first official battles of the american revolution nicknamed “the shot heard around the

Boston Massacre Painting - There are many different versions of what happened at the boston massacre. paul revere used

If you don’t know where you are going you’ll end up somewhere else . “ - . &quot; planning fit for the future

Class Assignments - . short papers 1) captain kidd paper a) ta has graded them b) will be handed back today 2) long paper