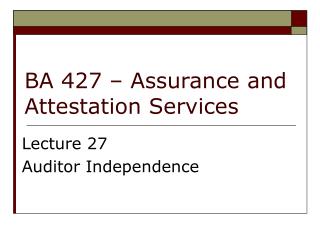 BA 427 – Assurance and Attestation Services . Lecture 27 Auditor Independence. Independence: Introduction. Independence issues might arise from any relationship that exists between an auditor (or the audit firm) and the client. Examples include: Assurance services - . the broad range of information enhancement services that are provided by certified public

Statements on Standards for Attestation Engagements - . clarifying the attestation standards. commonly known as