The Only Girl on the Team - PowerPoint PPT Presentation 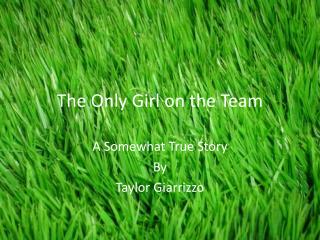 The Only Girl on the Team The Only Girl on the Team. A Somewhat True Story By Taylor Giarrizzo. As a commuter, you know it can be pretty hard to get involved on campus. But Paul, a nice short kid, offered you a spot on a intramural co-ed flag football team that he plays for. Do you accept the invitation? YES or NO.

The Only Girl on the Team Take Note: - . the 2013 tayshas reading list. me and earl and the dying girl . b y jesse andrews. “during my senior

Team + Hand + Ball = Team Handball - . answer the following questions. do your best!. question # 1. including the goalie,

Our goal is for every HISD student to be … - . a leader. works collaboratively and leads by example. embraces new ideas

The Trouble with Tuck - The setting . the story occurred at a little girl's house. helen is the little girl. it was