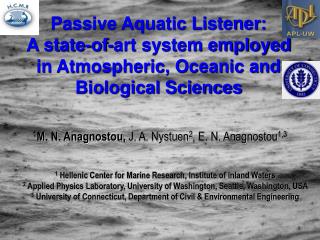 Aquatic Ecosystems - . what is an aquatic ecosystem? . in spanish, the word “ agua ” means “water”. in italian,

Present Passive - Mela melinawati , m.pd. present passive. use of passive. passive voice is used when the focus is on the

Listening - . listen up!!!!. passive listening- a listening role in which the listener does not share in the

The Effect of Listener Emersion on the Number of Learn Units to Criterion on Listener programs - . gili rechany m.a. bcba