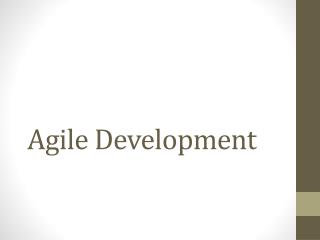 Agile Development. What is “Agility” ?. Effective (rapid and adaptive) response to change Effective communication among all stakeholders Drawing the customer onto the team Organizing a team so that it is in control of the work performed Yielding … Agile: Unlocking our human potential - Updated talk given at the psychology of scrum-agile user group in london on monday

Worse Is Better, for Better or for Worse - Presented at agile singapore (14th november 2014) nearly two-and-a-half

Git Branching for Agile Teams - Moving to git opens up a whole new level of agility for software teams. freed from the

Principles of Development - . chapter 8. key events in development. development describes the changes in an organism from

DevOps Best Practices for Mobile Apps - . sanjeev sharma, as played by john lanuti ibm software group. him 18 year in the