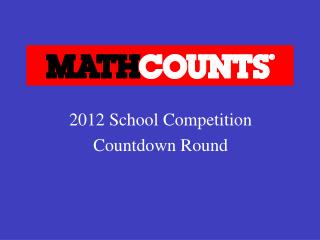 2013 School Competition Countdown Round - . 1. each interior angle of a regular polygon measures 140 degrees. how many

Countdown Round - . berkeley math tournament – fall 2012. countdown. an iso sceles triangle is inscribed in a circle

MATHCOUNTS 1993-1994 State Competition Countdown Round - . a man digs a hole 6 inches deep for a post to hold his

Countdown to April 2012 - . ensuring all students get quality careers education and guidance. continued provision of

Countdown to London 2012 - . issue 4. april 2012. order timelines. there are no changes to standard contractual lead

Countdown to London 2012 - . issue 5 june 2012. order timelines. there are no changes to standard contractual lead times

Year Round School - . htay ku paw james beavers iii. why is it important. year round school is important because it gives

COUNTDOWN! - . by ellen and adam. there are ten butterflies in the air!. there are nine trees getting cut down!. there

Themis Competition 2012 - . why are we against the application of the principle of mutual recognition to evidence issues

Mahragan competition 2012 - . theme this year: “be transformed”. to be truly transformed, we need to answer the

2012 Business School Competition Approach &amp; Plan Versus - . after 5 years of hosting case competitions with both