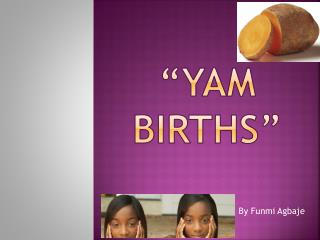 “Yam BIRTHs ”. By Funmi Agbaje. What is a yam?. Yam is a versatile vegetable belonging to Discoreaceae family S tarchy, tuberous root of tropical tree They are a rich source of carbohydrate, dietary fat and minerals and are low in saturated fat Economics of Fertility - . chapter 5. economics of fertility. 1960s about 4 million births in the us nearly 1 out of

The Japanese Situation Related to Infertility from Patient s Point of View - 2. data regarding infertility in japan ?.

Spurious Association - . sometimes an observed association between a disease and suspected factor may not be real . e.g.

Medicaid Programs in the South and Southwest Cover a Higher Share of Births - . share of births covered by medicaid,

Probability - . part ii. tree diagram. used to show all of the possible outcomes of an experiment. example. a couple

Preterm Births In Black Women - . as compared to the general population in massachusetts health disparity protect by :

Functional Dependencies - . babies. at a birth, there is one baby (twins would be represented by two births), one