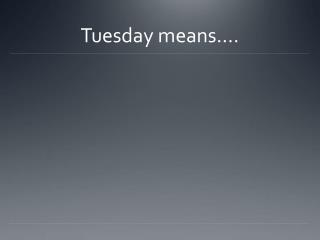 Tuesday means…. Homework collection…. Let’s remember…. What are the (8) characteristics of living things?. Today we are going to learn about…. THE SCIENTIFIC METHOD! The fundamental cornerstone of ALL SCIENCE!!!. Today’s Resources. Handout on the Scientific Method

Tuesday 3/6/12 - . aim: how does the genetic code get out of the nucleus? do now: show the product after dna replicates:

HAPPY TUESDAY!!! - . take out your vocab so i can check it and get ready to start a new unit!! the following people got

Chapter 6 Pragmatics - . 6.1 introduction. when a diplomat says yes , he means ‘perhaps’; when he says perhaps , he

Introduction to Bioinformatics Tuesday, 29 January - . x. can we push the due date to friday?. introduction to

Tuesday, April 24 th - . warm up. write an equation that represents this table simplify. please complete warm up. a

Separating Mixtures - . what is a mixture?. when two or more materials or substances are mixed together but do not