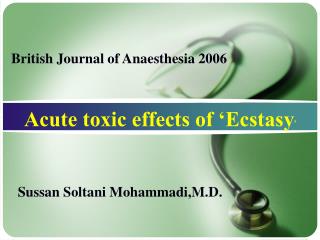 CPAP and BiPAP - . “a cpap a day helps keep the et tube away!”. thanks to former state medical director keith wesley

Methamphetamine - . by: mollie olinger. what is methamphetamine?. a synthetic drug with more rapid and lasting effects

MDMA - . by: torrin glick. what is mdma?. mdma (3,4-methylenedioxymethamphetamine) is a synthetic drug known as an

Methamphetamine - . shannon sweigart. what it is. meth-in the drug class of stimulants quickens mental and physical

Ecstasy - . erica richards kristine lake. what is ecstasy?. ecstasy schedule i drug a stimulant a hallucinogenic has

Ecstasy - . by bella. what is ecstasy?. ecstasy was originally know as mdma in the 1970’s, it was used as a party drug

Little Bo Peep - . little bo peep did take her sheep out to the meadow for grazing. she had a picnic all of her own

Helping children and families before, during, and after initiating CPAP/BiPAP therapy - . rebecca coffman, ccls, ctrs

METHAMPHETAMINE - . methamphetamine. objectives: faces of meth what is it? other names meth is known by. general facts

University of Tehran - . in the name of god. tehran university of medical sciences. primary effects of new leishmania

In the Name of God - . obs &amp;gyn exam questions, cases and notes by: mitra ahmad soltani