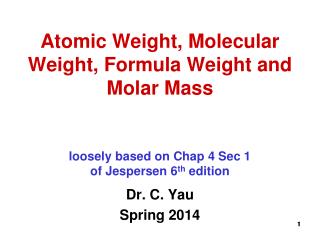 Weight vs. Mass - . some key terms. matter: is anything that has mass and takes up space. mass: the amount of matter in

Formula Weights - . the weight of an individual molecule or formula unit also known as molecular mass or molecular weight

Atomic structure - . mrs. selent. matter. anything that occupies space and has mass. mass is the quantity of matter an

Formula Weight &amp; Molecular Weight - . the formula weight of a compound equals the sum of the atomic masses of the

Weight Measurement - . weight &amp; mass :-. in everyday usage, the mass of an object is often referred to as its

Determining the Molecular Weight of a Substance from its Formula - . why is molecular weight important?. the molecular

Mass vs. Weight - . definitions. we tend to use the terms mass and weight interchangeably, but they are not the same

Determining the Empirical Formula of Copper Chloride - . purpose of the experiment to determine the empirical formula of

Mass vs. Weight - . definitions. mass – amount of stuff (matter) in an object weight – force exerted on an object

Weight Loss, How To Lose Weight Fast - The calorie: what you need to know how a food diary can help you lose