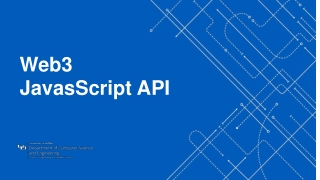 Web3 JavasScript API. References. https://web3js.readthedocs.io/en/1.0/ https://github.com/ethereum/wiki/wiki/JavaScript-API. Introduction. A Dapp or a decentralized application depends on the functionality of a blockchain for its infrastructure and operations. API - Rk. api. // called by wtm to get id of the nurse who is responsible for the specified patient bool

Foundation API - . the fast version. follow my examples. example: building app for gmap on stampede materials are in the

Odds API - Betsapi is the best betting website conducting betting for various games of sports. visit here and enjoy the