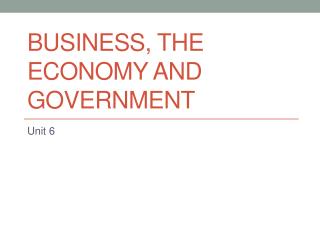 Business, The Economy and Government Business, The Economy and Government

GOVERNMENT AND CITIZENSHIP - . civics vocab. civics: study of citizenship and government. citizen: member of a community

Business Cycles, Unemployment, Inflation, and Fiscal Policy - . our government has an interest in measuring the

US Government - . not good to be a king. “if men were angels no government would be necessary” -james madison

E-Government - . week 1. leading the e-government. what is a government? define electronic government . steps in leading

The Global Economy Business Cycle Indicators - . investors’ guide to business cycles . ?? add something like this

The Soviet Union &amp; China- The Transition from Command Economy to Market Economy - . why the soviet union failed