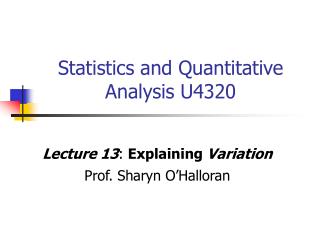 Statistics and Quantitative Analysis U4320

Statistics and Quantitative Analysis U4320 From Standard Form To Slope-Intercept - . solving equations for “y”. when an equation is in standard form: x and y

1-30-13 Linear Functions and Slope EQ: How do you find slope from two points or from an - Equation? . bop: explain what

Writing an equation from Slope Intercept - . slope intercept form. is the slope is the y-intercept. identify slope and

Dr. Sharyn Slavin Miller , Azusa Pacific University - The intersection of race and religion: the role of spirituality in

Slope Intercept Form - . y intercept. to find the y-intercept, plug 0 in for x in the linear equation and solve for y.

The slope-intercept form of a line: y = mx + b - . graph the following family of lines using the graphing calculator:. y