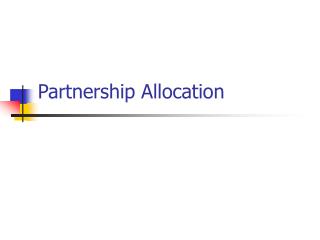 Resource Allocation - . given n . observations, how should we allocate them to a treatments? use a lagrange multiplier

Disk Allocation - . cs 537 - introduction to operating systems. free space. need to keep track of which blocks on a disk

Register Allocation - . cs 320 david walker (with thanks to andrew myers for most of the content of these slides). main

Dynamic Allocation - . eric roberts cs 106b february 4, 2013. one region of memory is reserved for variables that persist

Cost Allocation - And federal compliance. why is cost allocation important?. what is the difference between direct and