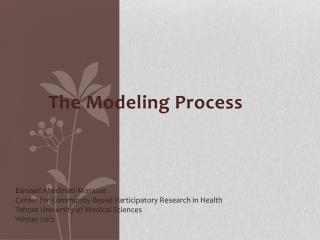 The Modeling Process. Esmaeil Khedmati Morasae Center for Community-Based Participatory Research in Health Tehran University of Medical Sciences Winter 2012. Modeling does not take place in splendid isolation. It is embedded in a social context.

IDEF3 - . process modeling. importance of process. it is not the products, but the processes that create products, bring

Unified Modeling Language - . chapter5. introduction. a model is an abstract representation of a system, constructed to

Unified Modeling Language - . a language for specifying , constructing , visualizing and documenting the artifacts of a