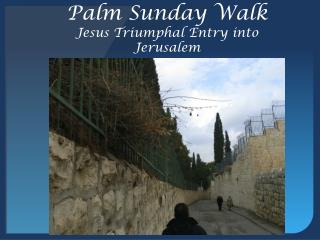 PSY 345  To exceed, you must read/Uophelpdotcom

PSY 250  To exceed, you must read/Uophelpdotcom

Easter feast - . easter is the second greatest holiday of christianity. we commemorate jesus christ’s crucifixion and

Mark Read - Update anomalies: how to get yourself into and out of trouble with resources in a project server world. mark

Palm Sunday - . crown him with many crowns, the lamb upon his throne; hark how the heav'nly anthem drowns all music but

NetDMR - . what is it and what can it do for me?. what is netdmr?. a web-based tool that allows permittees to

Sinless Life of Jesus - . “for we have not an high priest which cannot be touched with the feeling of our infirmities;

Beyond the Gospels - . new testament cont. what is the purpose of the gospels?. to learn about jesus, his life, friends,

Palm Sunday - . by: ryan, louisa, ela, javier. palm sunday mass . palm sunday is a day when we remembered the day when

Welcome to Worship! Palm Sunday - . a candle in remembrance of a loved one. please join us for holy communion!. welcome