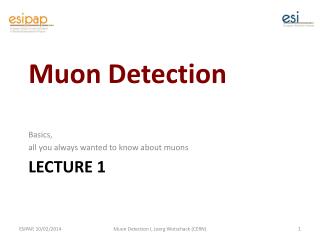 Muon Detection. Basics, all you always wanted to know about muons. Lecture 1. How everything started . T he m uon discovery. Muons were discovered by Carl D. Anderson and Seth Neddermeyer in a cloud chamber experiment at CalTech in 1936. Mandible &amp; TMJ Lecture - . rt 233 week 7. hello class, this is my preliminary lecture, i may add more slides over