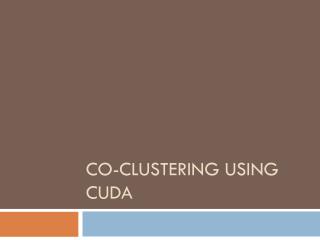 Co-clustering using CUDA. Co-Clustering Explained. Problem: Large binary matrix of samples (rows) and features (columns) What samples should be grouped together? Why? What are shared features? Co-clustering provides you the “why” explicitly Correlated sample/feature pair. Row cluster: Idea of Co-Clustering - . co-clustering to combine the row and column clustering of co-occurrence matrix together and

CUDA - . antonyus pyetro do amaral ferreira. the problem. the advent of multicore cpus and manycore gpus means that

CUDA - . all you wanted to know about it, but was afraid to ask!. paulo ivson netto santos waldemar celes filho nov 2007.