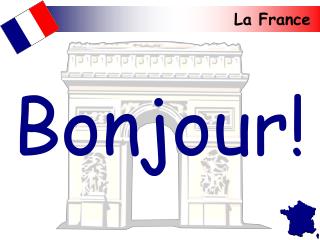 La France. Bonjour!. La France. France is the largest country in western Europe with a population of approximately 56 million people . It is bordered by both the Mediterranean Sea and the Atlantic Ocean. La France.

Year 7 - France - . objective: to conduct research and create a four slide presentation using powerpoint or a poster (and

GOVERNMENTS OF FRANCE - . matt c. 2a . les gouvernements de france. absolute monarchy . l asted until 1792 and had been

France in World war One - . grant and ethan. a map of europe during world war one. life in france before the war. nearly

Life in New France - Lecture outline. i. quebec and the fur trade (1608) the company of 100 associates (company of new

Bastille Day in France - Parades and celebrations to mark bastille