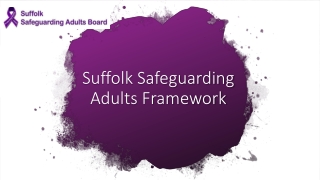 Suffolk Safeguarding Adults Framework. Suffolk SAB: Vision, Mission, Values and Pledges. “Safeguarding is everyone's responsibility”. Everyone in society has a responsibility to protect and safeguard children and adults from abuse and neglect