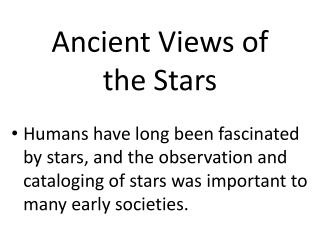 Ancient Views of the Stars Ancient Views of the Stars. Humans have long been fascinated by stars, and the observation and cataloging of stars was important to many early societies. Egyptian. Star table from the ceiling of the tomb of Ramses VI

Ancient Views of the Stars

Stars - . properties of stars. astronomers classify stars by their color, size, and brightness. other properties are

The Birth of Stars - . chapter twenty. guiding questions. why do astronomers think that stars evolve? what kind of matter

Stars, Galaxies, and the Universe - . carin miranda smyrna middle winter 2010. stars. stars are made up of gases. when

Stars - . nebula. nebula. massive collection of dust and gas in the universe. can be: nursery for new stars graveyard for

Earth in Space - . chapter 1 section 1. focus questions. what causes day and night? what causes the cycle of seasons on

History of Physics - . a condensed version. what is physics?. it’s a warm summer night in ancient greece… the

Stars: Birth, Life and Death - . there are 3 types of stars that you need to be familiar with... low mass stars

Stars - . dr katy lancaster. overview. introduction to stars what they are what we can measure the hertzsprung-russell

Chapter 4 Test Study Guide - . origins of astronomy. 1. why did copernicus hesitate to consider alternatives to the