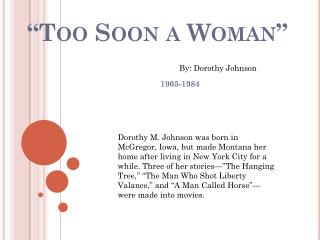 “Too Soon a Woman” By: Dorothy Johnson. “Too Soon a Woman”. Dorothy M. Johnson was born in McGregor, Iowa, but made Montana her home after living in New York City for a while. Three of her stories—”The Hanging Tree,” “The Man Who Shot Liberty Valance,” and “A Man Called Horse”—were made into movies. 1905-1984.

“Too Soon a Woman”

How to woo a Women - Discover how to woo a woman in the right way. read this document to know the best way to woo any

Ante Natal Care - . definition. systematic supervision of a pregnant woman from time of pregnancy till delivery so as to

Women at Work - . “every woman is a working woman” “a woman’s work is never done.” “she works hard for her

Agony and Ecstasy Norris Armstrong Modified for use at EHS by Penny Dunning - University of georgia-athens. susan, a new

When the bough breaks: Mental Illness in the Pregnant and Postpartum Woman - . dr.mariam alawadhi md,frcpc assistant