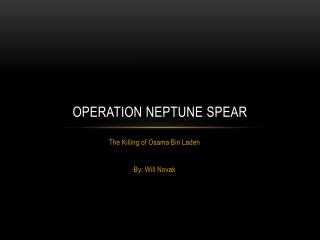 Operation neptune spear . The Killing of Osama Bin Laden By: Will Novak. Map Of where Bin laden was found. Bin Landen was hiding in the Pakistani city of Abbottabad from 2006-2011 . The navy seals.

The Many Deaths of Osama bin Laden - . ian cahall, tanner wolffram, wesley smith. how did the various media outlets

May 2, 2011: Death of Osama Bin Laden - Watch the news broadcast and think of the following questions: how is the

Vote for Neptune - . by trevor royster. facts about

Was Osama Bin Laden’s Assassination Lawful? - . u.s. law does not provide legal authority for assassination as

Operation Overlord - . the day of days. allied invasion. june 6 th , 1944 soldiers had been training in britain from as

How Osama Bin Laden Was Located and Killed - . a sprawling compound in a middle class neighborhood. bin laden and his