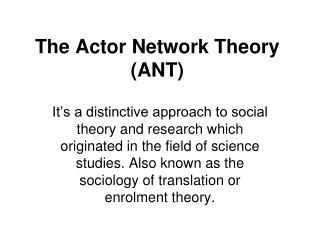 The Actor Network Theory (ANT). It’s a distinctive approach to social theory and research which originated in the field of science studies. Also known as the sociology of translation or enrolment theory. The term "Actor network theory" was devised by Michel Callon in 1982.

Delft University of Technology - . the netherlands. the logo : flame of prometheus. stealing fire from the gods, giving

Vocab lesson 4: - . complete the vocab chart with notes and submit on the day of the vocab quiz. affiliated. def : (adj.)