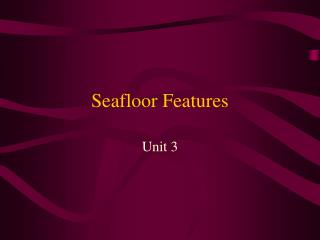 Seafloor Features. Unit 3. Common Features of the Seafloor and Coastline. You need to know the definition of each of these terms as well as what they look like…. Abyssal Plain. flat regions of the deep ocean floor among the Earth's flattest and smoothest regions the least explored Seafloor Features - . unit 3. common features of the seafloor and coastline. you need to know the definition of each of

Seafloor Ecology - . how to study the marine environment and the importance of habitats and food webs. the marine

Seafloor Spreading - . the plates pull apart and new crust is formed when magma goes to the surface and cools. seafloor

Seafloor Spreading - . chapter 17.2. ocean floor discoveries - through the use of modern technologies such as sonar and

17.2 Seafloor Spreading - . objectives. summarize the evidence that led to the discovery of seafloor spreading. explain

Mapping the Seafloor - . mapping the seafloor. depth soundings the earliest soundings were made with a hand line of rope