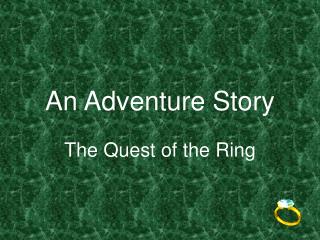 An Adventure Story. The Quest of the Ring. Rob was a happy-go-lucky kind of boy who lived with his poor widowed mother in a little fishing village. Times were often hard for Rob and his mother but he helped his mother however he could. WALT write an adventure story - . purpose: to entertain. what is an adventure?. a dventure is a genre that has adventure

My Adventure Story ‘The Basement’ - . an adventure story made just for you by: maria joe. choose your own ending with

An African Adventure - . chapter 1 – the new neighbours. one sunny sunday morning, sam and emma were looking out of

A Pick Your Own Adventure Story - . by christina gasse. click here to start your adventure:. the journey begins!. its

An adventure in Africa - . do you know some places of interest in africa ?. egyptian pyramids( 埃及金字塔）. lake

An Adventure in Assessment - . stephen “gavin” weiser, m.ed stephen.weiser@gmail.com. a lil about me. gavin weiser

An Adventure in Driving - . car club battle is an exciting new format of driving event for car enthusiasts in the

S.O.S.: An Ocean Adventure - . s.o.s. an ocean adventure. over the next 4 weeks you will embark on a competitive ocean

An Adventure in Driving - . car club battle is an exciting new format of driving event for car enthusiasts in the sydney,

An Adventure With Friends - . written by