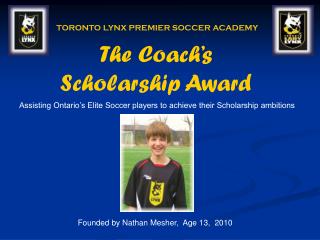 Coach Don Meyer - . yesterday is history. tomorrow is a mystery. today is a gift and that is why we call it the present.

The European Quality Award - “simply the best…”. the european quality award. “there are many benefits of entering

SCHOLARSHIP PRESENTATION OVERVIEW - . financial aid available general timelines what you should be doing how to apply for