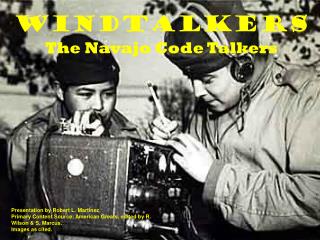 The Pacific War - . what major battles happen between japan &amp; the us in the pacific?. i. allies strike back. a.

CRYPTOGRAPHY - . lecture 9 language as a cipher. language. a foreign language is a great cipher – if there is no one

All about the Navajo Indians: - . who were the navajo?. the word navajo comes from the indians, meaning “farmlands or

The Navajo People - . or, the dine. bell ringer. brainstorm everything you know about the navajo people (feel free to

The Navajo Code Talkers - . by: eric whitmire. during wwii, the u.s. government used a code the japanese would never

World War II - . “code talkers”. who the navajos were:. their tribes were located in utah, arizona, and new mexico.

The Decision to Drop the Atomic Bomb - . events leading up to the decision. progress in pacific guadalcanal-1 st major

Navajo Artist Online Gallery - If you are looking for perfect unique art for your home wall, then visit