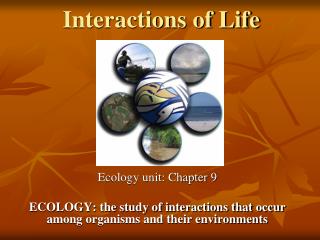 Interactions of Life. Ecology unit: Chapter 9 ECOLOGY: the study of interactions that occur among organisms and their environments. Birds are a help to the rhinoceros. Interactions of Life - . and world biomes. section 1: living earth. a. biosphere—the part of the earth that

Ecology: Interactions of Life - . 24.1. biosphere- part of earth that supports life; includes the top portion of

Types of Interactions - . pgs. 14 - 19. interactions with the environment. most living things produce more offspring than

Types of Interactions - . most living things produce more offspring than will survive. a female frog, for example, might

CHARACTERISTICS OF INTERACTIONS - . in a radiation interaction, the radiation and the material with which it interacts

INTERACTIONS OF MATTER - . i. compounds &amp; bonding:. compound = a substance made of chemically combined elements.

Social Interactions and Commerce (in Second Life) - . april 4, 2011. last week: how does the social network affect

Interactions - . acrostic poem use words/phrases to describe the topic. c h i n a. haiku. 3 line poem with a total of 17

Interactions - March 29, 2011. hep. interactions. kihyeon cho. what is the world made of? what holds the world together?