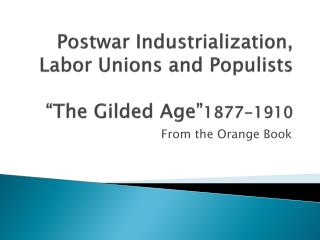 Postwar Industrialization, Labor Unions and Populists “The Gilded Age” 1877-1910. From the Orange Book. Theme of the Gilded Age :. Rise of industrialism in the United States and the interplay of business and politics. The Age of Railroads. Railroads encourage growth

THE ROLE OF RESEARCH AND DEVELOPMENT IN THE INDUSTRIALIZATION PROCESS IN KENYA - . moturi c. and ogada t. kenya