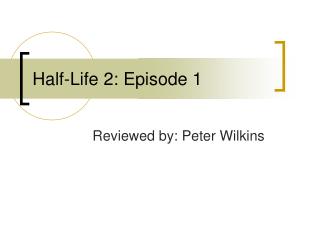 Half Life - . the half-life of a quantity whose value decreases with time is the interval required for the quantity to

Half-life - In the iodine clock reaction, there are really two processes happening simultaneously. the first is a slow

Half-Life - . definition . a half-life is the amount of time it takes for half of a radioactive sample to decay.

Half-Life - . determining the age of a material. how to determine the age of something. types of dating. absolute (exact

Half-Life - . nuclear chemistry. what is half-life?. the time it takes for half of a given amount of a radioactive

Half-life - . measuring the speed of radioactive decay. why?. it can be difficult to determine the ages of objects by

Half-Life - . h alf-life is the time required for half of a sample of a radioactive substance to disintegrate by

Half- Life - . chapter 4.1. finding a date by decay . finding the age of something thousands of years old can be

Half life - . what is the half life of an element and why is this important? . starter: 1024 competitors enter a

PowerPoint Presentation #2 - . keaton cutler. a look at organelles. cell membrane. while not an organelle by definition,

Half-Life - . half-life is the time that it takes for 1/2 a sample to decompose. the rate of a nuclear transformation

Episode: 1 - . episode2:. 1 more episode left!. 2 never before seen episodes can be won if you are the first to enjoy the