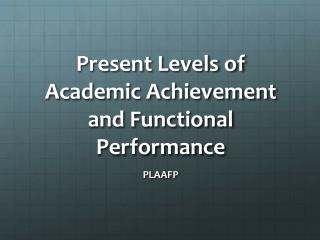 Present Levels of Academic Achievement and Functional Performance. PLAAFP. What needs to be included?. PLAAFP statements are required, at minimum, to answer the following: What are the students present levels as related to the needs identified in the evaluation report or any previous IEP?

Functional Skills - . a guide. “functional skills is a central piece of the jigsaw” qca (qualifications curriculum

DISCUSS ACADEMIC achievement WITH YOUR PROFESSOR! - . exercise your responsibility to discuss your academic performance

Student Achievement Goal Setting: An Option for Connecting Teacher Performance to Academic Progress - . an overview of