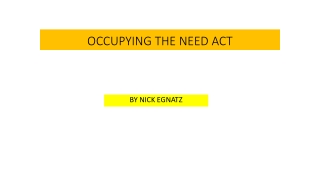 Why You Need the Defense Base Act Insurance - In order to protect workers who werenu2019t military men, the defense

The 2013 Practice Act: What You Need to Know - . sara peidle ms rd ld epda legislative chair. why do we need to modify

The Affordable Care Act: What You Need to Know - . john fallon john.fallon@csh.org october 16,2012. the aca is confusing.

The ACT - . what you need to know by talent search. the act. the test the dates how to sign up the cost how to prepare

The Employee Free Choice Act: Everything You Need to Know - . background on employee free choice act. in the 110 th

THE NC STATE ETHICS ACT: WHAT CORPORATIONS NEED TO KNOW - . a presentation for april 2008. overview. corporate and

The Stamp Act - By : reb iii. the stamp act . on february 6 th 1765 george grenville rose in parliament to offer the