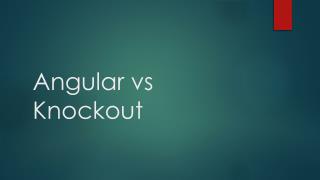 10 Reasons Why You Should Use AngularJS - Angular.js has come a long way during recent years. such is the situation that 9 Reasons Why AngularJs is the Most Popular Framework - Angularjs is an advanced framework introduced by google. when it

MVVM for the Web - . angular vs. knockout. vs. @ basarat. why mvvm?. cleaner user interface (used to be cleaner code

MVC vs MVP vs MVVM - . no one in the world ever gets what they want and that is beautiful*. chris mclean. he’z just zis

What is a Knockout Mouse - Knockout:- gene inactivatedtransgenic:- gene(s) added- can be:- a foreign gene - extra copies