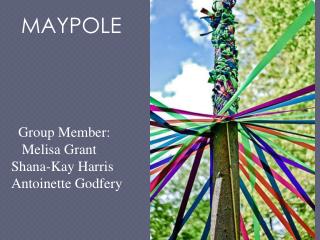 MAYPOLE Group Member: Melisa Grant Shana-Kay Harris Antoinette Godfery. What is Maypole?. Maypole is a pole painted and decorated with flowers. It is a traditionally dance that is done on may day which is May 1 st or midsummer. Grant Writing 101 - . “ there is no grantsmanship that will turn a bad idea into a good one, but there are many ways to

Harris’s Cultural Materialism - . by dr. frank elwell. credit. this presentation is based on the theory of marvin